I just discovered vnStat, a network traffic monitor for Linux. Here’s a blurb from the website:

vnStat is a network traffic monitor for Linux that keeps a log of daily network traffic for the selected interface(s). vnStat isn’t a packet sniffer. The traffic information is analyzed from the /proc -filesystem, so vnStat can be used without root permissions.

It will tell you how much inbound and outbound bandwidth that your Linux machine is using—hourly, daily, weekly, monthly, yearly. That’s handy.

By inspection, I’ve been able to tell that it runs like so: it installs itself as a cron job that runs every five minutes to update its internal database. Then you can type vnstat on the command line to give you the stats.

I’d post some sample output, but since I’ve just started running it, there’s nothing to show. I’m glad to have found it, though.

I’m wondering if anyone else has experienced trouble with the Python that comes installed with Ubuntu when trying to use the official Python BitTorrent client. (Note that Ubuntu comes with a Python BitTorrent client, but it’s completely different than the official one. Seems like a rewrite. I don’t know its origin.) Anyway, the official btdownloadcurses.py eventually hits some error that screws up the screen drawing, and btlaunchmany.py eventually stops working and begins sucking up 100% of the CPU.

I’ve seen lots of discussion regarding different clients and different OSes with regard to the 100% CPU usage. But I don’t think this is related. Now my intuition told me that the fault lies with Ubuntu’s Python installation. The above problems occur under Hoary and Breezy, and I’m using Python 2.4.2 of the Ubuntu base installation and BitTorrent 4.0.4 downloaded from the BitTorrent website.

So in an experiment last night, I grabbed the sources from www.python.org and compiled my own Python 2.4.2 from source. So far, the official BitTorrent client hasn’t cracked or croaked when running under this Python. So there is something weird about Ubuntu’s Python installation. I wonder what’s different about it.

Update: Well, I spoke too soon. After two days of running soundly, the client gave up the ghost just like before. So, now what? I guess I’ll go back to FreeBSD.

On Linux, you can look at the file /proc/cpuinfo to find out information about your computer’s CPU. Here’s the info on my two machines.

“CARL”, my desktop at work:

“BEAKER”, my desktop at home:

According to the bogomips value, which is a hand-waving sort of index of cpu speed, my machine at work should be faster. Now CARL has 384 MB of RAM and its video card only 32 MB, but BEAKER has 512 MB of RAM and 64 MB of video RAM, so BEAKER has a much quicker user interface. Note that both of these machines have motherboards and CPUs that are three years old. But they still run great for what I do with them.

What bogomips values do your computers have?

In a previous post, I mentioned that I’m now using Ubuntu Linux with Gnome as my primary desktop. There, I forgot to mention one of my favourite features of Gnome: a time-out facility that encourages me to take a typing break. Under the keyboard settings, I set it to force me to take a 5-minute break after 50 minutes of using the computer. It monitors my use of the keyboard and mouse, and after the specified time, it greys-out the screen and locks the keyboard. There is an option that allows me to postpone the break, which comes in handy when I’m on a roll when writing or in an instant-message conversation.

Although this feature is designed to help prevent repetitive stress disorder caused by keyboard and mouse use, I find it is more useful to me for giving my eyes a rest. When I’m working, I get very focused and can sit in front of the computer for hours without moving. So this “take a break” feature of Gnome is very good for me.

If this sounds like a helpful thing for you, but you don’t use Gnome, try searching for a similar utility for Windows, Mac, etc.

A few weeks ago, I bought myself a new desktop computer so that, for the first time in years, I have a permanent place to put my projects and files. I was going to base this new computer on FreeBSD, and in fact I had already installed and rebuilt the system from source, but I decided to give Ubuntu Linux a try on a separate partition, based on the high praise it gets from the Lug Radio crew. Well, since then, I’ve completely abandoned my FreeBSD setup. Ubuntu Linux rocks! It makes a wonderful desktop computing environment.

What is Ubuntu Linux, anyway? Well, it’s a new Linux distribution that’s aimed at the desktop (as opposed to servers). It’s completely Free Software in that they don’t charge you to use it and they also don’t take away your rights to use it through some crazy End User License Agreement. It aims to be simple and robust so that it just works.

Using Ubuntu is a pleasing experience. I can tell it’s designed well. Visually, it’s quite pleasing, based upon the Gnome desktop environment. The base software they chose to include is quite good. I upgraded a few components, like the Firefox web browser and the ability to play mp3s. It was a reasonable procedure that was aided by the advice of the Unofficial Ubuntu Starter Guide.

Everyone loves screenshots, so here’s mine. I haven’t changed the theme from the default “Human” theme. I just removed the bar from the bottom and combined it with the one at the top. 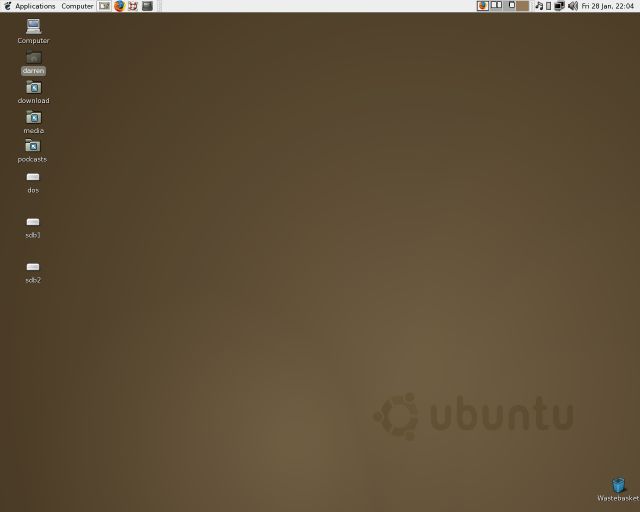 I was considering to get my mom to switch over to using Firefox instead of Internet Explorer, for security reasons and for better functionality, but now I might suggest she move completely over to Ubuntu. Chris Dunphy got his parents to switch over to Fedora Core 3 (21 January 2005 post), so why can’t I do the same? It’s worth exploring.

Well, a second mention of my name happened today, in as many weeks, out there on the Internet. And this one really surprised me. The guys at LugRadio mentioned me in the introduction to their latest episode (Season 2, Episode 7, 17 Jan 2005). LugRadio is a bi-weekly Internet “radio” show focusing on Linux and Open Source issues, produced by four guys in the UK. And it’s really a lot of fun to listen to.

It came about like this. I was reading various blogs of the LugRadio presenters one day, and I came across the blog of one of their regular listeners, Schwuk. His blog alerted me to the existence of the book Free as in Freedom which I started reading (see this earlier post of mine for the story). This pleased me enough to fire off an email to Schwuk to thank him for the tip. In the email I mentioned that I was a LugRadio listener, just so he would have an idea where I came from and why I was reading his blog. He must have passed this information on to the LugRadio guys, telling them that they have a listener in China. This impressed them enough, I figure, to talk about the email I sent. They had a good time making fun of Canada and saying hello in Chinese. [So good job guys. You really surprised me.] I’ll have to send an email directly to them this time, to tell them a little more about myself.

If I get around to it, I’ll extract the clip for you, my readers, and post it here. In the mean time, head over to www.lugradio.org and download their latest episode. If you are at all interested in Linux or Open Source, I highly recommend this show. They give lots of great information and discuss the issues with plenty of opinion, and they have a great time doing it. In this same episode, they do a great interview with Mark Shuttleworth of Ubuntu Linux, which is highly intelligent and informative. It’s a great episode, and not just cause I’m mentioned in it!

In any case, I wonder why I’m getting all this attention all of a sudden…