My friend Jason Rule was in Edmonton for the Father’s Day weekend and had a funny trip back from Edmonton to Calgary. In his own words, here is what happened. 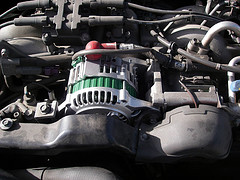 While driving in Edmonton, I noticed at one point my alternator light go on… It just happened for a second and I did not really think anything of it. Later as I was leaving the city, the light was about 50% on, so basically it’s putting out some power—the exact amount the car needs. By the Edmonton International Airport, the light was on and I was running on battery power (the battery power was making the spark for the engine).

I went into conservation mode and turned off all electrical systems but the radio.

Around Red Deer, the engine started skipping a beat and the radio died. There was not enough power to spark the plugs… I pulled over (leaving the engine running) and quickly wired up my second battery to the engine by the wires I had pre-installed years before. The car’s back to life!!! I turn off the radio and keep driving.

It starts raining… I try using the windshield wipers, but there is so little power, they take about 10 seconds to cycle. So, with no fan (defog) and no wipers… I continue.

I need to stop in Didsbury where Brooke’s dad lives. I needed to pick something up and get as much power as possible. About 10 km from Didsbury, the dash fails, no speedo, nothing… About 3 km from Didsbury, the car is skipping again. I am approaching a stop sign and go to apply the brake. The power going to the brake lights makes the engine quit. As I was still travelling fast, I pop the clutch and get the engine running again. I then stop the car with engine breaking and the ebrake. I just get to the house and park in front of her dad’s truck.

Without explaining what I was doing, I start his truck and start transferring as much power as possible via booster cables into the car battery. I also start charging the second battery via a charger…. How long to wait… it’s 8 p.m. and the sun is going down. By 9:45 p.m., it will be dark and I will need headlights and I will be screwed… But, I need as much power as possible.

I pull out almost all of the circuit breakers from the fuse box. At 8:15 p.m., I start driving, extra battery not connected, car battery driving the engine. There are no electrical systems at all…

I make it to just north of Airdrie. Engine, with no warning, fails… Poor steering and brakes (that was a surprise). I pull over and remove the primary battery and install the secondary battery. I tried to start the engine, but there is not enough power to turn the starter…. I get out of the car, push it backwards, down the little hill I was on… Pop the clutch and the engine is running… I’m off.

I make it to Deerfoot and McKnight. Engine again quits… I pull over and call Brooke. The Deerfoot Trail is nuts as cars are going by at nuts speeds. She comes quickly and now it’s about 9:30 p.m. I pull the extra battery from her truck and throw it into the car. The car starts and we start driving—Brooke following me and being my lights.

About five blocks from home, car again fails… We load the gear into the truck and leave the car there for the night… We come back the next morning with a charged battery and drive home.

Two points to this story:

View all posts by Darren