From OSNews.com we get this cool announcement about Linux in Asia:

Here’s a very interesting interview of Lisa See, a journalist and culturalist, who went to a remote part of China to investigate a secret, ancient language used only by women known as Nü Shu 女书. It is the story of well-to-do women who spent their whole lives in isolation in upper-story bedrooms. They developed this language to secretly explore their inner lives and to communicate to other women in similar isolation.

It is a fascinating look at an obscure part of Chinese history and culture.

I bought a Don Williams CD from a fairly mainstream music store here in Beijing. It looked okay, had holograms in all the right places, and even had a silver ingot inside the see-through spine, bearing the name of the record label: “Bailey”. When I actually opened the package and turned the disc over, the recorded surface was all pitted and didn’t look right. So I wasn’t surprised when my CD player couldn’t read the Table of Contents. Fortunately, my computer’s CD player was able to read it without problems. But here’s the most interesting bit. The warning that goes around the outer label of the disc reads as follows:

As a former Social Studies teacher of mine used to say, “I kid you not.” Spell check, anyone? Nope, not in China. I guess what I bought wasn’t legitimate after all. The music’s great, though.

Imagine for a moment the under-served population of fans of both Mickey Mouse (TM) and the Teletubbies (TM). When choosing her wardrobe and accessories, today’s fan of these cultural icons would forever be forced to choose between Mickey Mouse or Teletubby for a given item, always having to weigh one above the other in her fashion choices. Imagine the horror.

Well, not anymore. Women in the free state of the People’s Republic of China now have more choice than ever. Just today, I saw a woman on the subway proudly displaying her love for her respective “licenced” characters by sporting a purse with a large, jovial Mickey Mouse against a white background dancing purple Teletubbies. The joy! (My eyes are tearing up as I write this.)

Without the restriction of corporate licenses, the fashion and accessory manufacturers in China (truly gods in their fields) are able to create goods for even the smallest niches of the market, including our Mickey Mouse-loving / Teletubby-infatuated subway rider. The free market thrives here, and it is truly wonderful thing.

Today is July 4, which marks the two-year anniversary of my involvement with Swing Beijing!. And how am I celebrating? By skipping, actually.

For the last two years, Swing has not just been a part of my life, but it has been my life. I found it at a time when I was just emerging from a one-year hermit phase. Thus, it launched me from my social isolation into a world where I was having multiple encounters with people each week. It also broke my one-year isolation from other foreigners here in China. It allowed me to develop the extroverted part of my predominantly introverted nature.

But it seems as though that time has come to a close. No, I’m not closing myself off and re-entering a hermit phase. I’m just moving away from Swing and concentrating my creative energy in other areas. In November last year (2004), I started to discover other bloggers and also the phenomenon of podcasting. I started connecting with people online, and I began contributing to conversations with others through leaving comments and giving feedback through email. And it has been an exciting time for me.

I’m not sure what the ultimate goal of this new direction in my life is, but I can tell that it’s the right direction. And that’s thrilling.

The hosting woes that I experienced a few months ago forced me to find a new hosting solution and ultimately a new blogging tool called WordPress. And the change has been fantastic. It’s a very powerful tool. But I’ve been sitting on the default look of the WordPress 1.5 install since then, so my site looks like too many others out there. I have been looking for a new design for the header at the top of the weblog, and I finally found one last week. So, here is the new look. It’s a star scene that I generated entirely from the mathematical functions found in the GIMP drawing program. I feel it suits my character and the nature of a “Mad Philosopher” quite well. Here is a screenshot of the new look. Here is the old look for comparison.

As always, comments are welcome. Thanks for joining me in the journey thus far.

If you are interested in China and the Internet and censorship—all that’s been in the news lately—Radio Open Source has put together a panel of people discussing the issues in amazing depth and clarity. I highly recommend listening to this one. They do a much better job than I could ever do at explaining the intricacies of the Chinese modern culture and present political situation.

I was just playing with The GIMP, the GNU Image Manipulation Program, following this tutorial on using layers. The result isn’t too bad, is it? 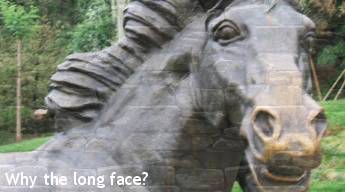 Notice how there is a texture of stacked rocks slightly over the horse’s face and also over the background. Not bad for free software. My ultimate goal is to figure out how to take the background header for this blog, and substitute an image into the blue “window”. Stay tuned for this eventual development.

The horse, by the way, lives in my ‘neigh’bourhood, at Mu Dan Yuan in North Beijing. He seems happy, despite the long face.

Wired News is carrying an excellent article about Isaac Mao, the Chinese über-blogger, and his views on how Microsoft’s MSN Spaces is sucking up to the Chinese government. Yes, everyone knows that Microsoft is a criminal organization (remember the anti-trust violations?), but sometimes we need to be reminded just how evil they really are. (Google is evil, too, remember, for sleeping with the Chinese government in the same way.)

If you know any Chinese who are interested in starting a blog, please encourage them to stay away from MSN Spaces.

The unfortunate news of the story, however, is in the last few paragraphs. They detail that the real problem with the Internet in China is not the ISPs’ or Microsoft’s censorship, but the apathy of China’s most wired citizens. For further reading, the following is a good editorial by Sascha Matuszak:

When logging in to Gmail, if you request the login page by specifying https explicitly in the address bar, as:

then your entire Gmail session will be encrypted, not just the password authentication handshake. Cool, eh?

Update: This tip will also help solve any problems with connecting to Gmail from China.

Well, after Shanghai, Suzhou, Hangzhou, Shanghai, I’m finally back home in Beijing. Gulistan’s niece Guliziba arrived at 06h00 on our first morning back to Beijing. We both worked Friday and Saturday, and then the May 1st to 7th holiday started.

So on Saturday, after work, the three of us met and then had a dinner with Gulistan’s classmates from university, a mini-reunion of about 12 people plus friends and spouses. While I was waiting for the two of them at the gate to her university, I sat on the grass and started and nearly finished working on a paper that I had to do. The evening was very beautiful and warm. Very nice. The dinner was great and I met some very good people from all over China. We finished the night by taking Guliziba to Tiananmen Square and Qianmen. The square was closed, but we were able to take photos and walk around the perimeter of the square.

On Sunday, we went to an opening exhibition of the artist Redxing’s 365 show, which featured a series of paintings that she had done one a day for a whole year spanning 2004/2005. Very cool. Then we went to my apartment to hang out and visit some of the parks in my neighbourhood. We ate at the local cheap and favourite restaurant, and then called it a night.

On Monday, we took an overnight trip with some of Gulistan’s friends from the arts and culture community to the countryside near Huairou, to the NE of Beijing. During the dinner, it was hard for me to relax and feel a part of the group because I don’t like to drink very much yet that was the theme of the night. But then I solved a candle problem and instantly relaxed and felt like I belonged. In short, one man brought out some candles and was trying to put them in the mouths of all the empty beer bottles, but the candles were slightly too narrow and would fall into the bottles. So I suggested sticking a toothpick perpendicularly through the base of each candle to stop them from falling inside. Instant success. And soon after, they cleared the floor and put on music for dancing, so I relaxed more and started dancing. I guess I’m a dancer now. I would have never in the past been made comfortable by dancing at a party. It seems I’ve changed, and everyone was impressed with my and Gulistan’s swing dancing, even if it was to the Eagles!

Back in Beijing on Tuesday evening, we spent time at my apartment so I could do laundry, and later we had dinner at Pizza Hut. Mmmm. Pizza.

And that brings us to today, which is Wednesday. My cousin Corinne has been teaching English in Changsha in southern China, and her sister and father have come to visit. The three of them will arrive in Beijing today and spend a few days here with us. We’ll have a Peking Duck dinner tonight and decide what sights to see over the next few days. Phew! After this is all over, I’m going to need a vacation from my many vacations! But I’m glad they are coming.

Pictures of Shanghai and everything else will follow once I get some time to work on them.