Sunshine and Snowflakes is my favourite Christmas music album in the world. Released in 1973 by Light Records (album LS-5625-LP) by Lexicon Music, Inc. and distributed by Word, Inc., it presents an upbeat and energetic take on familiar Christmas carols, sung by an impressive, 40-member children’s choir. Unfortunately, the album has been out of print for some time now, hence I wish to make it available here. The album is arranged by Clark Gassman and directed by Jan Gassman. 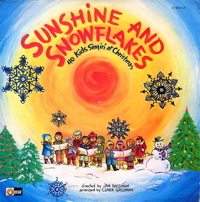 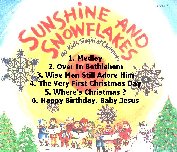 I digitized individual cuts of the album from a well-played LP record and converted them to 192 kbit, 44100 Hz, joint-stereo mp3 format using the Audacity audio editor and the LAME mp3 encoder. No (audio) compression, noise reduction, or any other digital signal processing was performed on the raw digital data, as I prefer the sound of the original vinyl recording.

I truly hope that you enjoy this unique Christmas music. “God Rest Ye Merry Gentlemen” and “Joy to the World” from the medley are not to be missed!

If you appreciate this music, please leave a comment below. Your stories are most welcome. And please link to this page on your website or weblog. Thanks!

Oh—and I’m not getting paid to say this—if you want, you can buy a used LP or an unofficial CD-R of this album from sweet-music.com.

Well, I’m having too much fun. I’ve been really busy these days. A little bit of work, a bit of play, and a whole hell of a lot of socializing. I was at a birthday party/get-together for my friend Allena last night. There must be live music at The Big Easy (a Cajun-style restaurant/bar in Beijing) every night because there was a live band there last night and we got up and danced Lindy Hop to a few numbers. They were playing blues, of course, but it worked well.

Right before that party, I was hosting two fellow Canadians who had just arrived in Beijing. Last week, at the Annual Canadian Charity Ball, I met and talked with the guest speaker, Canadian Astronaut Bjarni Tryggvason. We talked about the possibilities of space science research collaboration between Canada and China and getting Canadian payloads on Chinese recoverable satellites and manned missions. So he passed my name on to two of his colleagues (the two I met last night, Marcus and Catherine) so that they could hook up with me on their visit to Beijing. So this week, they’re visiting various institutes belonging to the Chinese Academy of Sciences (my employer). We had a great time last night, as they were very excited about being in China and experiencing everything they could in their week-long visit. I took them to a Guizhou-style restaurant, introduced them to whatever I could about the food, the beer, the culture. And I filled them in on things to do, things to avoid, and how to tell the difference between a 1.6 RMB and a 1.2 RMB taxi. Just so you know, the cheaper of the two taxis is smaller, especially the back seat, they don’t always have suspension, and they quite often carry a strong smell of gasoline in the interior. But hey, they’re cheaper, right? You will run the risk of a driver with bad B.O. and completely unbearable halitosis in either type of taxi. Welcome to China.

Why I haven’t written lately

I also have been avoiding computing tasks, including writing this blog. You see, I developed some extreme pain in the joints in my hand recently, and it seems to be related to typing at the computer. It was mostly aggravated by a recent assignment which involved editing on the computer for an entire week. I normally do my editing work on paper with a red and a black pen. That, and the weather changed extremely recently, with lots of low pressure and humidity. So I’ve been trying to rest my hands.

But that’s just a small excuse. I’ve also had lots of ideas of things to write about but I haven’t explored any of them, so none of them fully developed. My friend Jodi, a professional writer, suggested that I write out these ideas anyway so that I don’t lose them. Cause, yeah, she’s right. I’ve already lost them. My nighttime dreams overwhelm my daytime thoughts so much, and that’s another blockage to being able to think (and write) clearly.

SomaFM kicks ass. I’m still listening. You’ll remember that I wrote about SomaFM in a previous entry. I’ve been listening a few times a week (for about an hour at a time) so I decided that I should send them a donation. So last month, I sent them $25 USD via PayPal. I think it’s well worth it. You should too. Or at least start listening first.

I’ve explored some of their other channels only a little bit, but by far I listen to “Boot Liquor” the most. American Roots music, lots of songs about drinking, some really funny shit sometimes, and a few token bluegrass songs. Keeps me happy. When I first started listening, Boot Liquor was offered as a 96-kbit MP3 feed, but now it’s 128-kbit MP3 and that’s pretty much CD quality. Sometimes the feed is choppy, so I switch to the 32-kbit mono feed, and it works well. Plus my sound card came with some DSP software that can enhance the mono to a pseudo-stereo image, and that makes it better.

This is great! I discovered a new radio station yesterday, and I love it. It’s called SomaFM, and they are internet-only, commercial free, and listener supported. They seem to be playing the same kind of music that I get on CJSR Edmonton, which really pleases me. Their main website says that there are currently 3043 people listening to SomaFM now. That’s cool.

While it’s one “station”, they actually offer 7 different channels of music at various audio quality levels, the best being 128 kbps stereo MP3. This is impressive. The channels are:

You’ll have to visit the SomaFM website to read the channel descriptions. So far, I’ve been listening mostly to “Boot Liquor”, which is described as American Roots music, looking for (and getting) some bluegrass and Johnny Cash. I’ve also listened to “Groove Salad” for a while. I have yet to check out the other channels, but you can be sure that I will.

This sure makes up for the terrible broadcast radio that’s available here in Beijing. I’ll soon be listening enough to SomaFM that I’ll want to contribute (which is voluntary). It’s a good deal.

By the way, the title for today’s post comes from one of their station IDs, in answer to the question, “What does SomaFM feel like to you?.” Cute. Not exactly the answer I would have come up with, though.